How are Cashews Harvested? 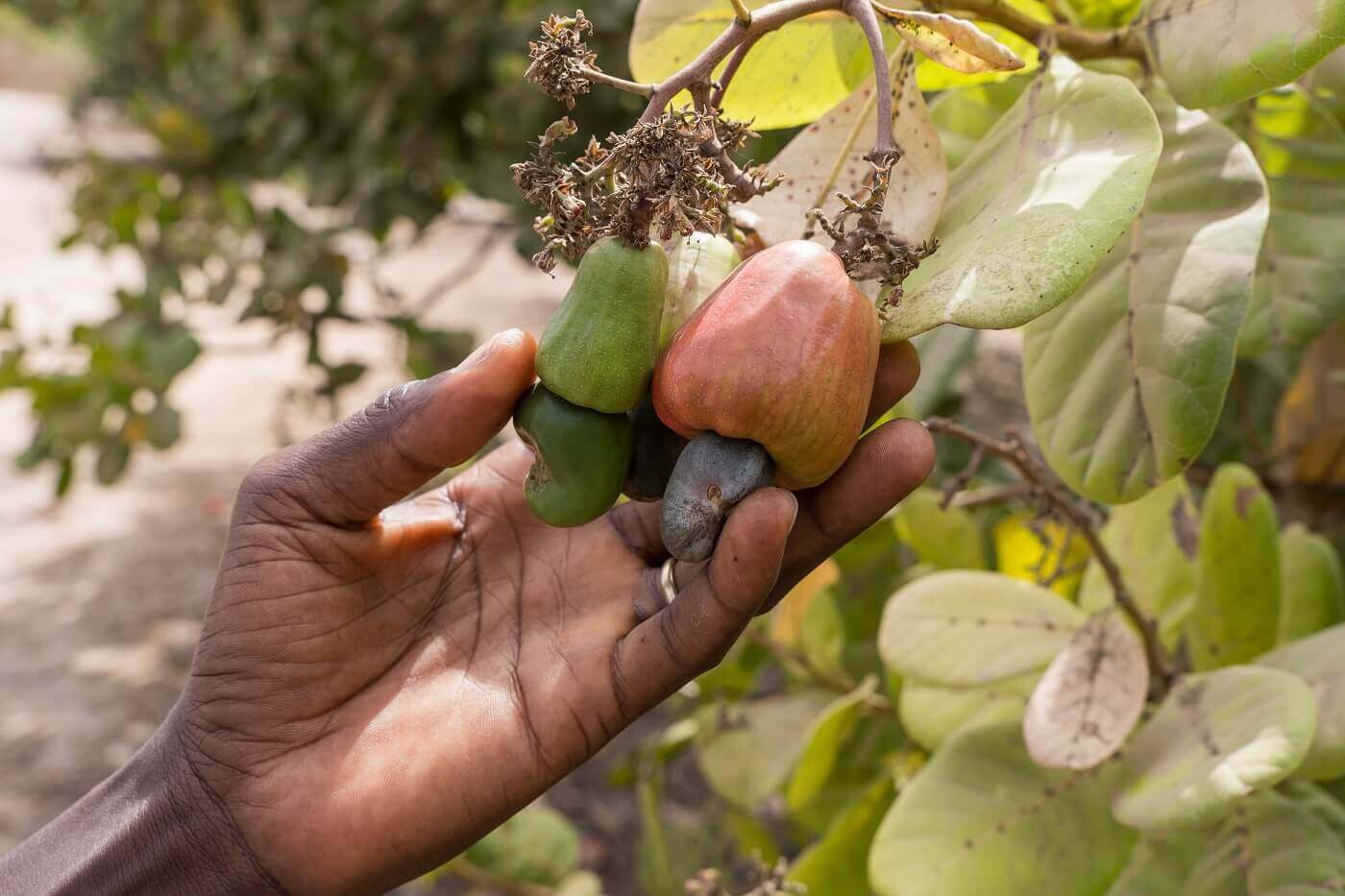 Did you know that cashews grow on trees? These cashew trees are native to Brazil but can now be found in tropical climates worldwide, especially in India and Vietnam. The fruit itself is not a real fruit and thus not eatable to humans, but the nut is often used in cooking.

This blog post will look at how these tasty nuts are produced.

What is cashew nut?

Cashew nuts are the edible seeds of a tree known as Anacardium occidentale, which is native to Brazil. The tree grows to a height of 30-40 feet and produces a food known as a cashew apple.

The seed, or nut, is located at the bottom of the cashew apple and is surrounded by a hard shell. The nuts are collected when the apples are ripe in the dry season, typically from February to May.

A double shell surrounds the seeds and contains allergenic phenolic resin containing anacardic acid. Compositions such as this are potent skin irritants. However, unlike poison ivy, which contains toxins such as oil urushiol, this resin contains chemicals similar to the more well-known allergen, oil urushiol.

Cashew nuts can cause allergic reactions in some people. Generally, food allergies are caused by the outer coating on the skin.

A brief history of cashew nut

It was in 1558 that Europeans discovered raw cashew nuts for the first time in Brazil. At first, they were considered inedible because of their hard outer shells. However, with time, it was discovered that the fruit’s skin was not fit for consumption and was thus declared inedible.

The indigenous tribes of the area, the Tupi-Indians, provided the Europeans with evidence to the contrary. To remove the skin, the Portuguese were instructed to roast the cashews.

Once this was figured out. The cashew seeds were considered quite tasty by Europeans. It should be noted that they also made wine from the pulp of cashew apples.

It is interesting to note that the local capuchin monkeys had taught the natives how to consume cashew nuts. To break the shells off of the nuts, the primates used primitive tools.

Major suppliers of cashews around the world

Second to Vietnam in terms of cashew suppliers, India is a major player in this market, supplying cashews to over 60 countries worldwide. The country generates almost one billion USD from its top four agricultural products from cashew nuts.

Cashew exports are vital to the economies of both India and Vietnam. In India, the cashew industry employs over 1 million people and generates nearly $2 billion in revenue annually. In Vietnam, the industry is even more important, with over 3 million people employed in cashew production and export. The industry’s health is thus critical to the well-being of both countries.

There are several challenges, however. One is that most cashews grown in both countries are exported to other markets, such as the United States and Europe. This leaves the industry vulnerable to fluctuations in global demand. Another challenge is that competition from other countries, such as Ivory Coast, is increasing. This pressure has led to a decline in prices paid to farmers for their Cashews.

Despite these challenges, there are reasons for optimism about the future. In India, for example, the government has instituted several policies to support export, including subsidies for farmers and incentives for companies to set up processing facilities in rural areas. There is also a growing domestic market for Cashews in both countries as middle-class consumers increasingly seek higher-quality snacks.

How are Cashews Harvested?

To understand how this is done, we must understand what a cashew tree and apple are.

It is a tropical evergreen that produces cashew nuts. The plant can grow up to 20 feet tall and is often used as an ornamental plant in landscaping. The leaves are dark green and arranged in an opposite pattern. The flowers are small and greenish-white, growing in clusters at the ends of the branches.

Cashew apples begin to form after the formed flowers. The fruit takes about three months to mature and is typically harvested along with the cashews.

Cashew apples are technically not apples at all. Instead, it is a pseudocarp, or false fruit, that resembles a kidney in shape. The outermost layer of the pseudocarp is thick and leathery, enclosing a sweet, fleshy pulp.

Cashew apples are native to Brazil but now grow worldwide in countries like India, Vietnam, and Nigeria. Although they are not as well-known as their nutty cousins, cashew apples are a delicious and healthy treat.

Let’s go over each of these steps in detail.

The procurement stage is the beginning of cashew production. For any manufacturer of cashews, this is an important step due to the seasonal nature of the product. Seasons for cashews vary by region.

Once collected from the ground, the pseudocarps are sorted according to quality. The best fruits are sent for processing, while those damaged or overripe are sold as animal feed or used as fertilizers.

The drying stage is critical in ensuring that the final product is high quality. After the initial processing has been completed, they are placed on racks and exposed to the sun.

The raw cashew nuts must be carefully monitored, as they can easily become overcooked or burnt.

Once the cashew nut has dried to the desired moisture content, they are ready to move to the next processing stage. Although the drying stage may seem like a simple step in the overall procedure, it plays a crucial role in determining the product’s final quality.

During this stage, the raw cashews are heated to high temperatures to remove the outer cashew shell. This not only makes the nuts more tender and easier to consume, but it also helps to bring out their natural flavor. Roasting also helps to kill any bacteria that may be present on the surface of the nuts.

While the nut can be roasted in various ways, the most common method is to use a drum roaster. This roaster uses indirect heat to evenly roast the nuts and prevent them from burning.

This stage is when the cashew fruit’s outermost layer, or hull, is removed to get to the nuts.

This stage can be done by hand or machine, but it’s a delicate operation.  To ensure that the raw kernels are not damaged, skilled labor is required.

The hulls are tough and can damage the nuts if not removed carefully. Once the hulls are off, the cashews are sorted according to size and grade.

The highest quality nuts are then roasted and flavored before the next step. Finally, the rest of the nuts are placed aside to be used as oil or animal feed.

During this production stage, cashew workers use special tools to remove the outermost layer of the fruit, revealing the nut inside.

This process can be tedious, as each fruit must be peeled by hand. Fortunately, recent years have seen the development of new technologies that help to automate the peeling. These technologies are helping to make cashews more accessible than ever before.

Several steps are involved in peeling the nuts to completely remove the testa from cashews without breaking the kernels. To ensure fewer breakages and resulting pieces, care has to be taken when handling whole cashew kernels.

The grading stage is important for determining the value of the crop. Cashews are graded according to size, shape, color, and quality.

The largest and most uniform nuts are given the highest grade, while smaller or misshapen nuts are graded lower.

Nuts that are discolored or have blemishes are also downgraded. After this has been done, the cashews are sorted into different grades and moved to the next stage.

Grade one nuts are typically used for roasted cashews, while lower grades are used for cashew butter or other processed products.

After the grading, they go through quality control. This is where the cashews are cleaned and sorted. This procedure aims to remove any impurities or foreign objects from the cashews.

The cashews are also fumigated during this process. Fumigation is a pest control method that uses chemicals to kill insects and other pests. After the quality control/fumigation is complete, the cashews are ready to be stored.

This stage of cashew nut production is vital to ensuring a high-quality product. Cashews are typically stored in either natural or artificial drying facilities.

Natural drying facilities, such as sun drying, are often used in areas with warm climates and low humidity levels.

This storage method helps preserve the cashews’ nutritional value and prevents mold growth. Artificial drying facilities, such as kiln drying, are often used in areas with cooler climates or higher humidity levels. They are also stored in an airtight container with non-toxic ink and glue to brand or mark the contents, lasting up to 6 months to a year.

This method of storage helps to prevent insect infestation and spoilage. However, regardless of the storage facility used, it is important to carefully monitor the temperature and humidity levels to ensure a safe and successful harvest.

The final stage in harvesting cashew nuts is the packaging. Once the cashews are weighed and inspected for quality. They are then placed in smaller bags or containers and labeled with information such as the weight, grade, and country of origin. The packaged cashews are then shipped to retailers, where they will be sold to consumers.

The packaging stage is an important part of the cashew nut production process because it ensures that the cashew is protected from damage during shipping and storage. It also allows retailers to provide accurate information to consumers about the product.

Do you have some more questions about this tasty nut? Below we answer some commonly asked questions.

Can you eat cashews right off the tree?

No, you shouldn’t. While it’s true that the raw cashew nut is encased in a hard outer structure, this is not toxic. Cashew shell oil is used in many products, including cosmetics and skincare items. However, it contains a small amount of urushiol, also found in poison ivy. Urushiol can cause irritation and swelling if it comes into contact with the skin. For this reason, removing the shell is important before eating raw cashews. Once it is removed, the nut can be safely consumed.

How are cashews shelled commercially?

The next step is when the cashews are shelled, typically done by hand. Next, a small metal rod is inserted into the cashew and used to pry open the shell.

Finally, the separated kernels are sorted by quality and size. The highest quality cashews are typically sold whole, while the smaller pieces are often used in processed foods.

Are cashews harvested by hand?

Yes. Unlike other nuts, typically gathered by shaking trees or using machines, almost all cashews are collected by hand. Cashew farmers climb the tall trees that cashews grow on and harvest the nuts by hand. This is time-consuming, but avoiding damaging the delicate cashew fruit is necessary.

After harvest, the nuts are dried and roasted before removing the ” kernel ” edible portion. The kernels are then sold whole or processed into products like cashew butter or cashew milk. The global cashew industry is worth billions of dollars, and hand-harvesting is critical to that economy.

Can you eat cashew apples?

No. While cashew apples are not poisonous, they are not typically consumed raw because of their high content of urushiol, a resin that can cause irritation to the skin and mucous membranes. However, this resin is destroyed by cooking so that cashew apples can be used in jams, pies, and other cooked desserts. In addition to their culinary uses, cashew apples are also used to make wines and liqueurs.