How are Cashews Processed? 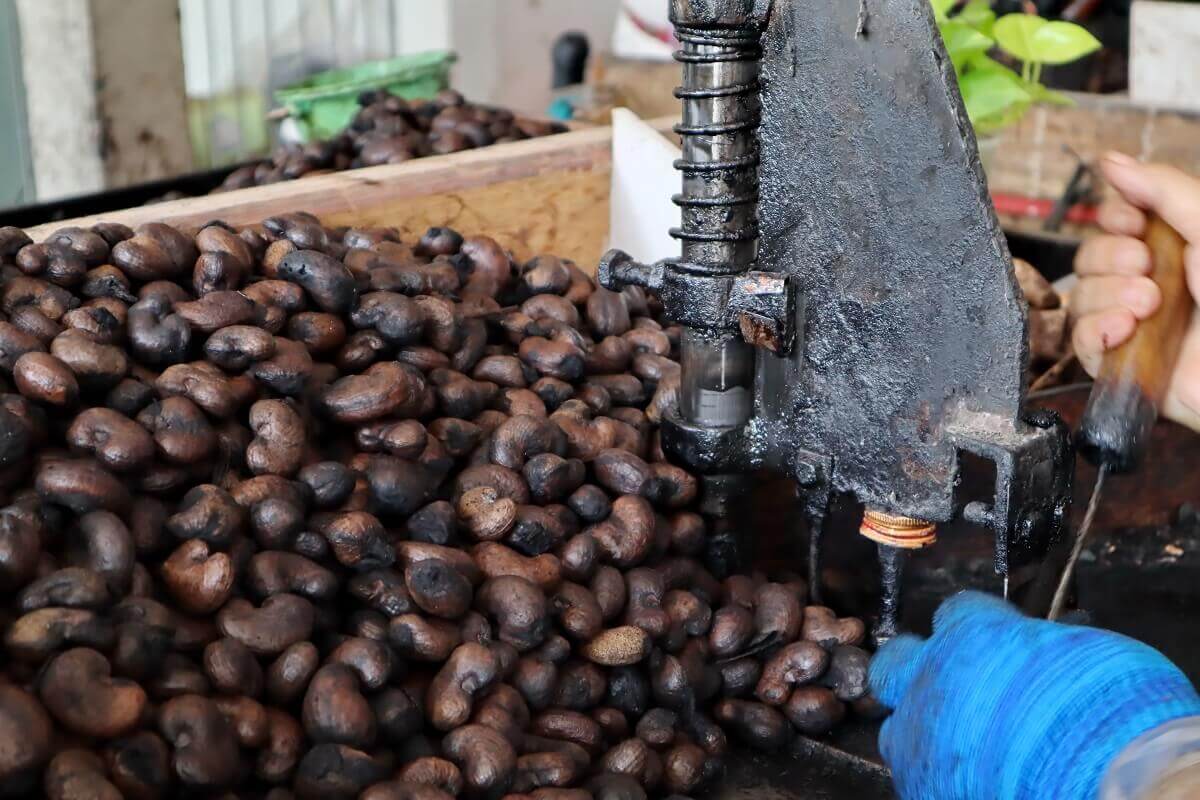 Who doesn’t enjoy the crunchy yet creamy texture and slightly sweet taste of cashews? These delicious nuts can be eaten raw, roasted, seasoned, or used in all recipes.

However, have you ever wondered where those cashews on the supermarket shelf come from? Cashews are one of the most difficult nuts to process: this process is much more intensive than other common nuts like peanuts, walnuts, and almonds.

Let’s dive deeper into how cashews are harvested and processed and what happens along the way before they eventually end up on your plate.

Where do Raw Cashews Come From?

Raw cashew seeds grow on trees: you’ll find them dangling under a bright red fruit hanging from the cashew tree.

Today, farmers worldwide, but most notably on the Indian coasts, Vietnam, and Ivory Coast, grow these trees and harvest them for their bounty. However, the cashew tree originates from Brazil. The tree was brought to India by Portuguese explorers in the 16th century.

Originally intended to help fight soil erosion along India’s southern coasts, the species quickly spread throughout the sub-continent. People quickly realized that these nuts were delicious to eat, and recognizing their economic potential, a million-dollar industry in growing, processing, and harvesting cashew nuts was born.

However, you can’t just pick the cashew nut straight from the tree. Instead, this kernel grows within an inner and hard outer shell, all with the unique kidney shape we all recognize as belonging to a cashew nut. Because of this complex structure of inner and outer shells, cashew processing is time-consuming and expensive.

We’ll explain this process in detail later in the article, but first, let’s look at the benefits of cashews and why you should eat them.

Cashew nuts have many health benefits, thanks to their ingredients which include healthy unsaturated oils and anacardic acid.

The moisture content of cashews is thanks to the high proportion of oils – this not only makes the nuts tasty, but these healthy fats are an essential part of any diet and will help you to feel fuller for longer. In addition, eating cashews will help curb cravings, avoid unhealthy snacks, and maintain a healthy weight.

Cashews also make a handy snack – these nuts last up to four weeks when stored in an airtight container in a cool, dry place. This makes them ideal for keeping in the pantry whenever you need an energy boost or for taking with you on trips or hikes.

Furthermore, you can eat cashews in plenty of ways, not just on their own! Add them to your trail mix, blend them into cashew butter, or use them as a fantastic ingredient in sauces or stir-fries.

Farmers need to be careful when harvesting the fruit, as the cashew nut shell liquid can irritate the skin. Workers typically wear long sleeves and other protective clothing to avoid skin irritations.

Cashew kernels can be cut away with minimal effort from the cashew apple. However, this is where the real work begins. The cashew shell needs to be removed from the raw cashew kernels, and this is a time-intensive, multi-step process to uncover the raw cashew nuts you’re used to seeing in the grocery store.

Let’s take a look at that process next.

Like many agricultural products, cashew nut kernels need to be processed before they can be distributed to stores and enjoyed by consumers. The cashew processing industry is a massive, multi-million dollar industry found mostly in India and Vietnam.

Here’s how cashews are processed, step by step.

Once the cashew fruit has been cut down from the tree, it needs to be dried to remove the oils and acids found in the outer shell. If this is not done, it will be risky to open the shell, as the cashew nut shell liquid can irritate the skin.

Usually, the cashew shells, or drupes, are dried for a few days in the sun. Then, the drupes are turned and rotated regularly to ensure uniform drying.

However, the nuts can also be frozen to dry out the oils and acids. Either sun drying or freezing the nut makes it safer to work with and eventually cracks open.

Once dry, the drupes are roasted: steam roasting helps to make the outer shell more flexible and allows workers to cut it open. There are several methods to roast and process cashew nuts. They may be roasted on an open fire, in an oven, or steamed in a boiler. Drum roasting is another common way to roast the drupes.

Even though the drupe, or outer shell of the cashew nut, is dry, it still contains toxic acids, so it can give off toxic fumes while roasting. Therefore, this step must be conducted in a well-ventilated area.

The roasted cashew nuts are then cooled before further processing.

The outer shell of the cashew nut is now soft enough to be removed. Next, workers break open the hard outer shell to reveal the cashew nut and its soft inner shell. The safety precautions must continue even at this stage, and workers should wear protective clothing, as the shell may still give off toxic acids and irritating liquids.

Traditionally, the outer shell was cut away by hand, and this process is often still followed today. In addition, these machines can do the cutting, and some processing facilities use such equipment. However, the downside of these machines is that they need to be the correct size to match the size of the cashew kernel.

For this reason, many processors continue to use workers to cut the outer shell of the cashew nut away by hand, which is a delicate and time-consuming process.

After carefully cutting away the hard outer shell, the workers carefully remove the inner kernel, which contains the cashew nut, though still in a softer inner shell. The cashew kernels are thoroughly washed, cleaned, and dried to remove any traces of the toxic oils found in the outer shell.

Once again, the cashew kernels are heated to peel away this inner shell. However, this is a much longer process than the roasting stage before: in this case, the kernels go in an oven for 24 hours, this time at a much lower temperature, around 60 degrees.

Exposing the kernels to low heat for this extended period makes the inner shell very soft and easy to peel. The workers carefully peel away the inner shell, finally exposing the raw cashew nuts. Care is taken not to break the nuts but to keep the whole cashews intact because they are much more valuable than broken pieces.

Once peeled, the cashews are sorted and graded. Once the inner shell has been removed, there should be no toxic acids or oils on the cashew nuts, making them safe to handle and eat!

Each peeled cashew kernel is put into several different grades according to its size. The largest cashews are the most popular and, therefore, the most valuable, so these are separated. The remaining peeled cashew nuts are sorted by size, and broken kernels are put to one side.

The cashew pieces may be sold separately or used to make sauces and cashew butter, but they won’t fetch nearly the same price. These pieces are not graded but can still be eaten and taste the same as whole cashews!

Finally, the processed cashews are packed to be transported for local sale or, more commonly, shipped overseas. Therefore, the cashews you buy in your local supermarket probably come from the other side. After all, they can only be harvested from the cashew tree, and this species only grows in certain climates.

Packing cashew kernels is also done with care to ensure the nuts are not damaged or broken. In addition, the seller guarantees they’ll get the best possible price for their product by keeping them whole and in tip-top condition. In most cases, the nuts will be shipped from the processing location to another facility, where they’ll be packed in their final packaging.

Should you Buy Fair Trade Cashews?

The cashew industry operates in a range of countries and is largely unregulated in many places it operates. As you’ve seen above, cashew processing is very time-intensive and involves several risks.

The cashew nut’s outer shell contains many toxic liquids and acids, which can be harmful to the skin when handled. Several stages of processing cashews involve handling the outer shell, whether harvesting the cashew fruit, cutting away the shell or cleaning the inner shell to remove toxic residues. Workers should have protective gear when performing any of these steps.

Furthermore, these toxic substances can be released when the drupe, or cashew kernel, is roasted, which can also be hazardous to workers.

However, if you buy cashew nuts that are not labeled as fair trade, you cannot be sure that the workers who process the cashews are adequately protected from these risks. Unfortunately, it is common in the cashew industry that workers do not receive adequate protective clothing and equipment or are forced to work in places with poor ventilation.

Workers may also be forced to work long hours to carry out the time-intensive processes associated with cutting and peeling cashew nuts. They may also be paid little for their work, and child labor may be used.

The only way to ensure that workers are treated fairly is to buy products with a recognized fair trade certification. This certification means that staff has fair working conditions, are treated ethically, and are paid well for their work. It also guarantees that child or slave labor was not used to make the product.

Processing cashew nuts is a complex, time-intensive process that lasts for days and involves several steps. This process is much more complex compared to processing most other types of nuts, largely because of two factors.

Firstly, once harvested, the cashew nut is encased in an inner shell and a hard outer shell, both of which need to be removed before eating. Additionally, the outer shell contains toxic acids and other harmful materials, so it needs to be handled carefully at all stages of the process.